Your fingers brush lightly across the time-stained, weathered pages of an elaborate tome. The aged parchment crinkles beneath your touch and the scents of musky pages and ancient ink transport you into a time long past, when monks labored with love and devotion to create their masterwork: the Book of Kells.

But what is this ancient work? Where did it come from and what secrets does it hold for those who gaze upon its pages? 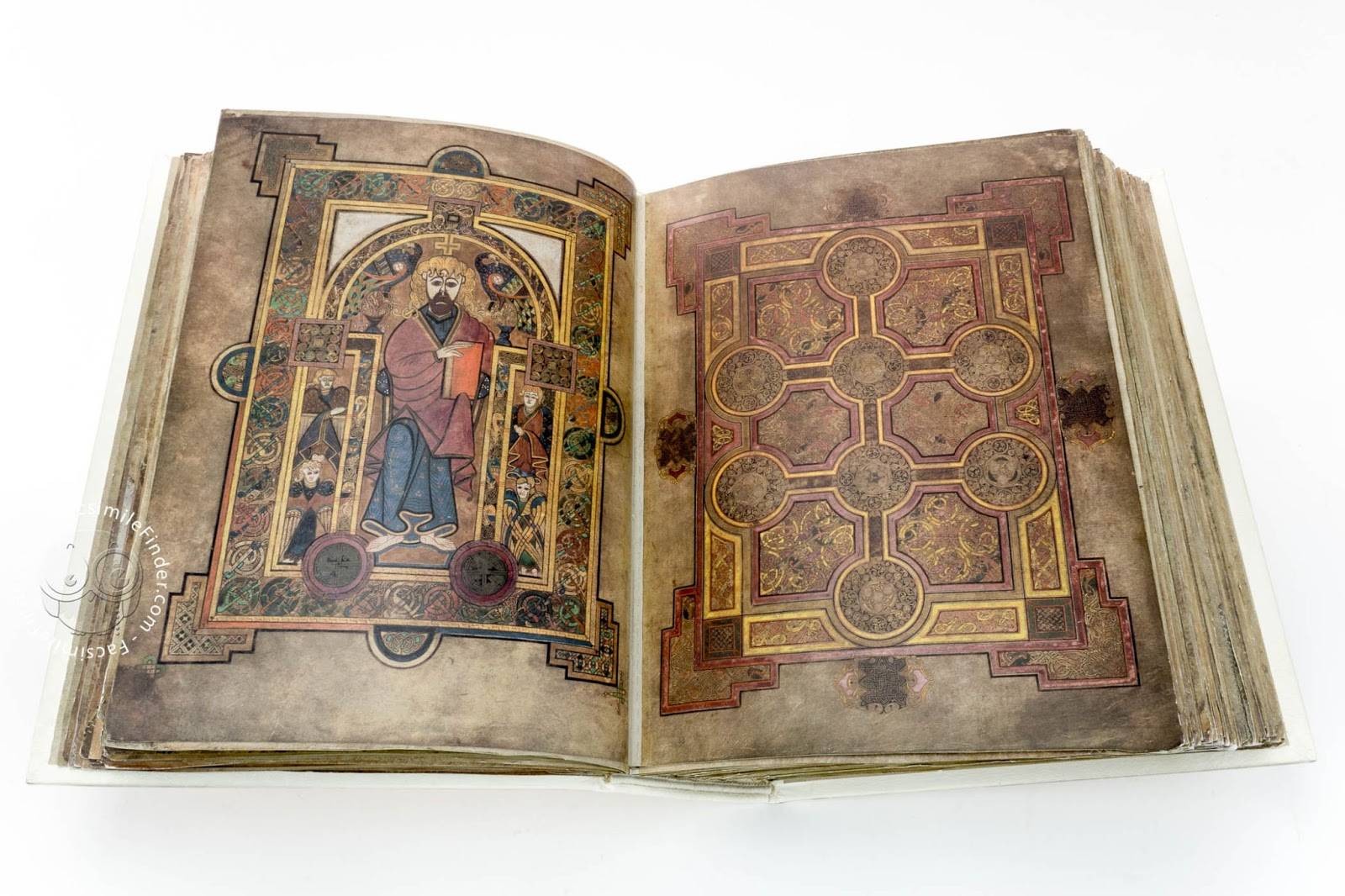 If you were to stand upon the rocky shores of the Scottish Isle of Iona, you would feel the fresh, salty sting of the cold sea air rising off the pristine blue-green waters where otters splash and play.

The trilling call of an arctic tern sounds in the distance as white-winged gannets swoop to claim their prey. Green grass waves around you, and behind you towers a stone monastery, weathered so that it seems a part of the island itself. 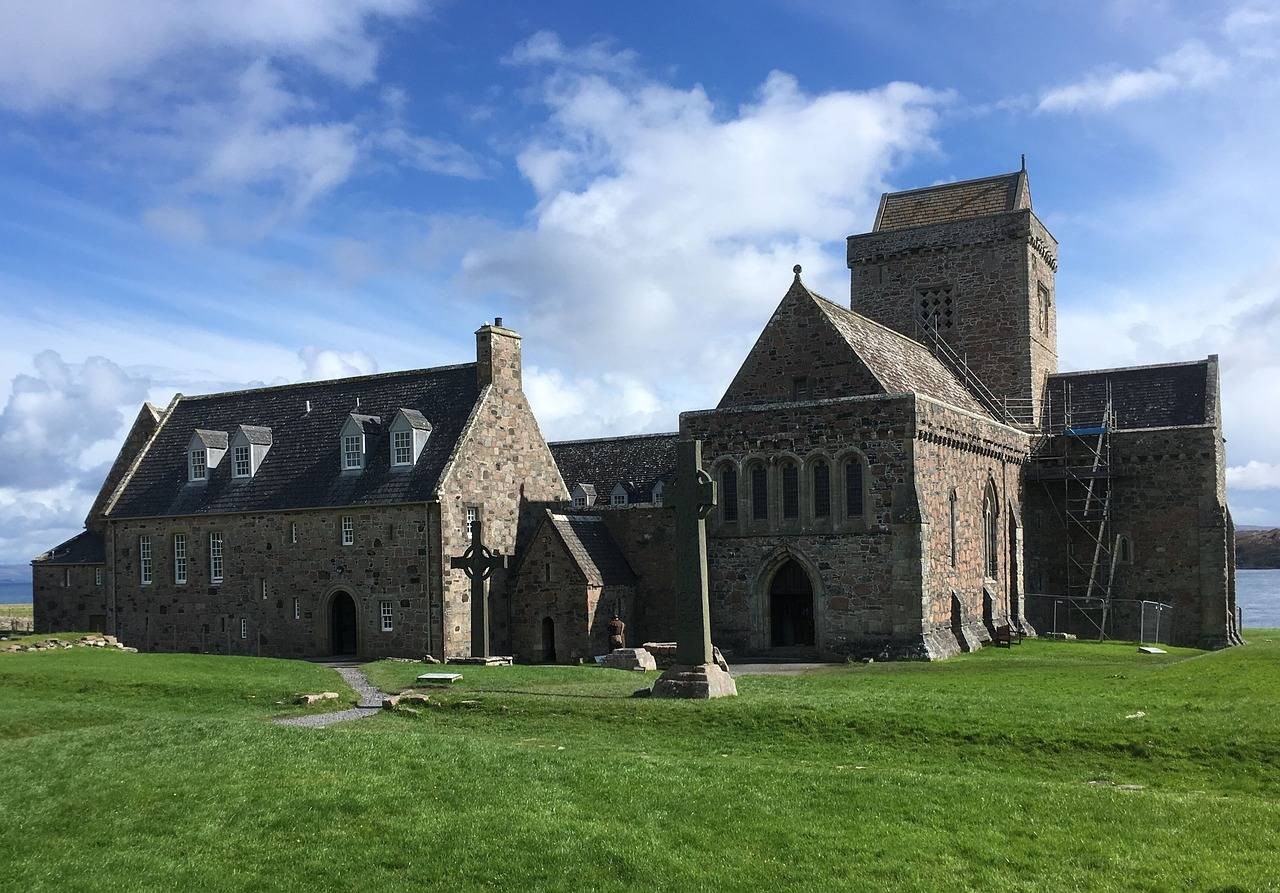 This is the Scottish Isle of Iona, the birthplace of the Book of Kells, a manuscript with an ancient history wrought of faith, hardship, and craft. 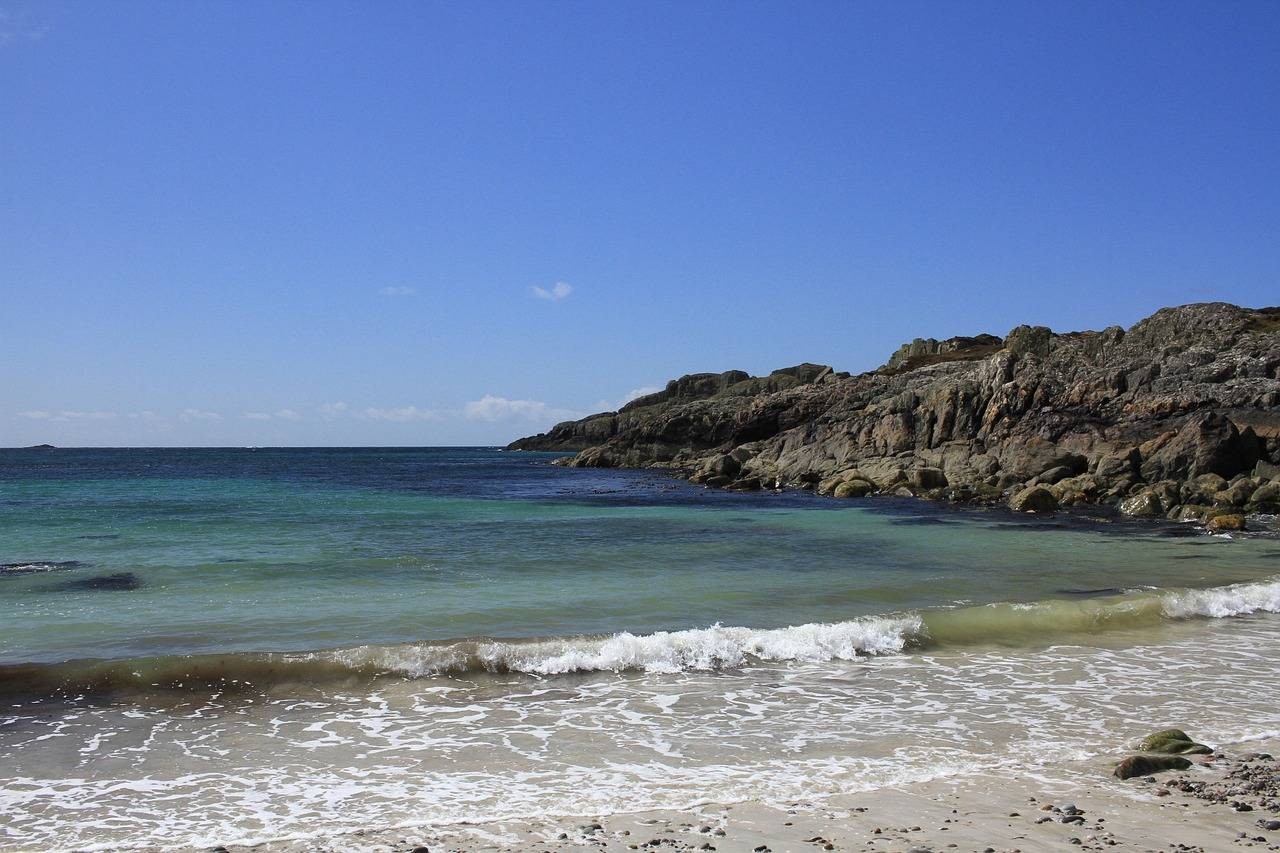 Founded by Irish monk Colm Cille, commonly known as Monk Columba, in the sixth century, the monastery on Iona exists in a breathtaking but challenging location.

The monks would spend hours bent over their work, meticulously forming each letter on every illuminated page, serenaded by the cries of seabirds and the whistle of the constant winds. Here begins the book’s journey, a journey that would span centuries of conflict and hardship. 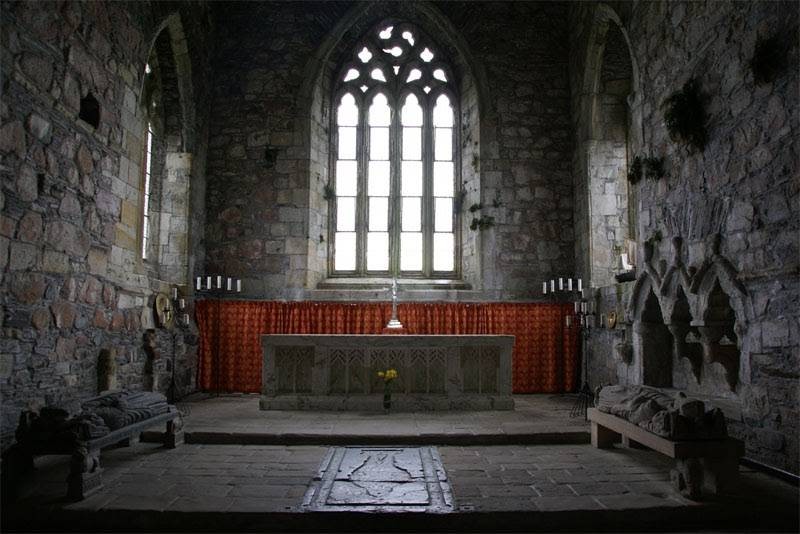 The monastery at Iona existed under the constant threat of Viking raids. After a devastating attack that cost sixty-eight members of their number their lives, the monks were forced to flee to a monastery at Kells in County Meath, Ireland, bearing their precious manuscript with them.

Here the book was guarded for centuries, passed from generation to generation, surviving the turmoils of history. After the book survived the destruction of the church that had given it its name, it passed through multiple keepers. In the end, it was entrusted to Trinity College in Dublin, where it remains today.

The Book of Kells is a testament to the faith, craftsmanship, and imagination of the monks who toiled over each colorful and intricate page. Even faded by the ravages of time, the colors of the inks shine forth in brilliant hues.

Elaborate flourishes fill every surface. The book showcases detailed design work, religious iconography, and scenes from nature near the island such as frolicking otters as well as exotic creatures like peacocks and lions. 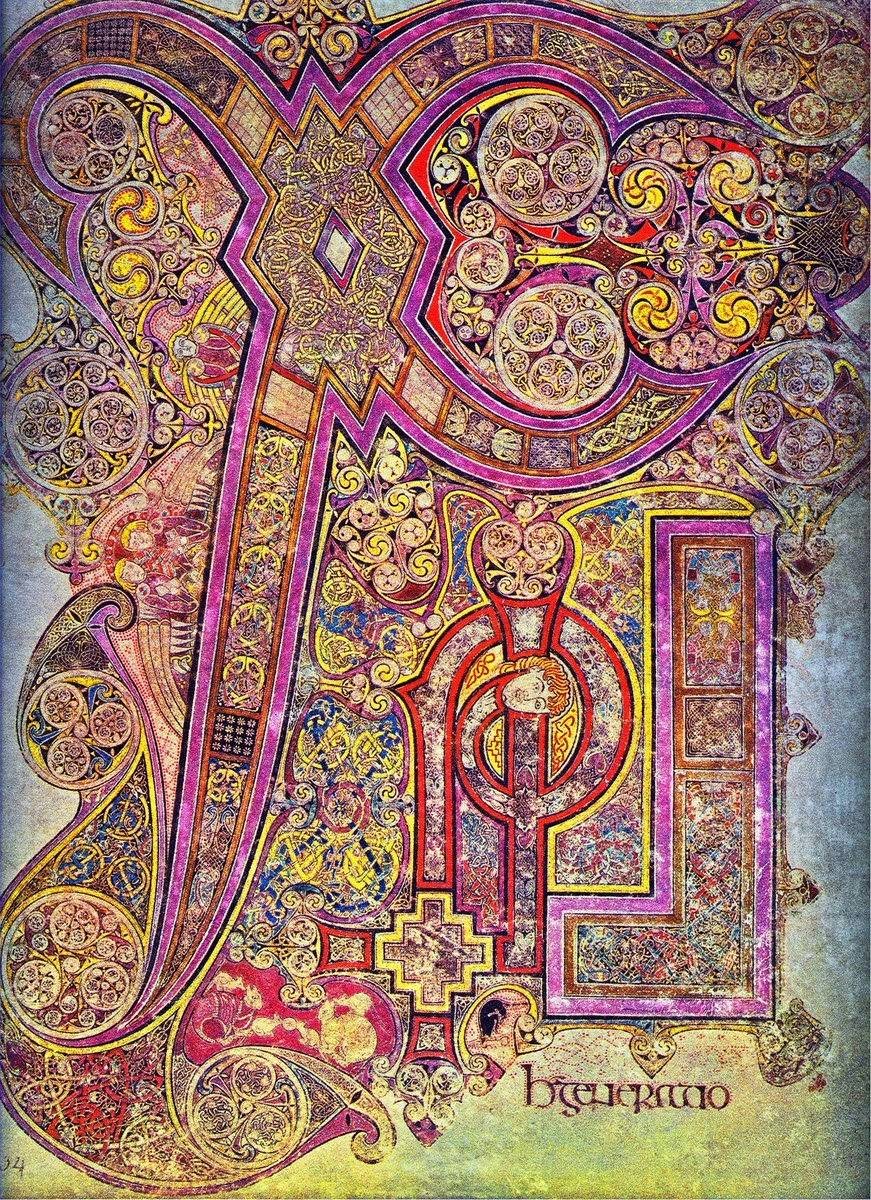 The inks, themselves, are an art form worthy of alchemists. Numerous pigments shine from the pages, including a blue of indigo or woad, a yellow formed of deadly arsenic, and a red from organic substances that remain a mystery to modern researchers. Monks would have to hand mix the pigments, an additional labor of love to add to their craft. 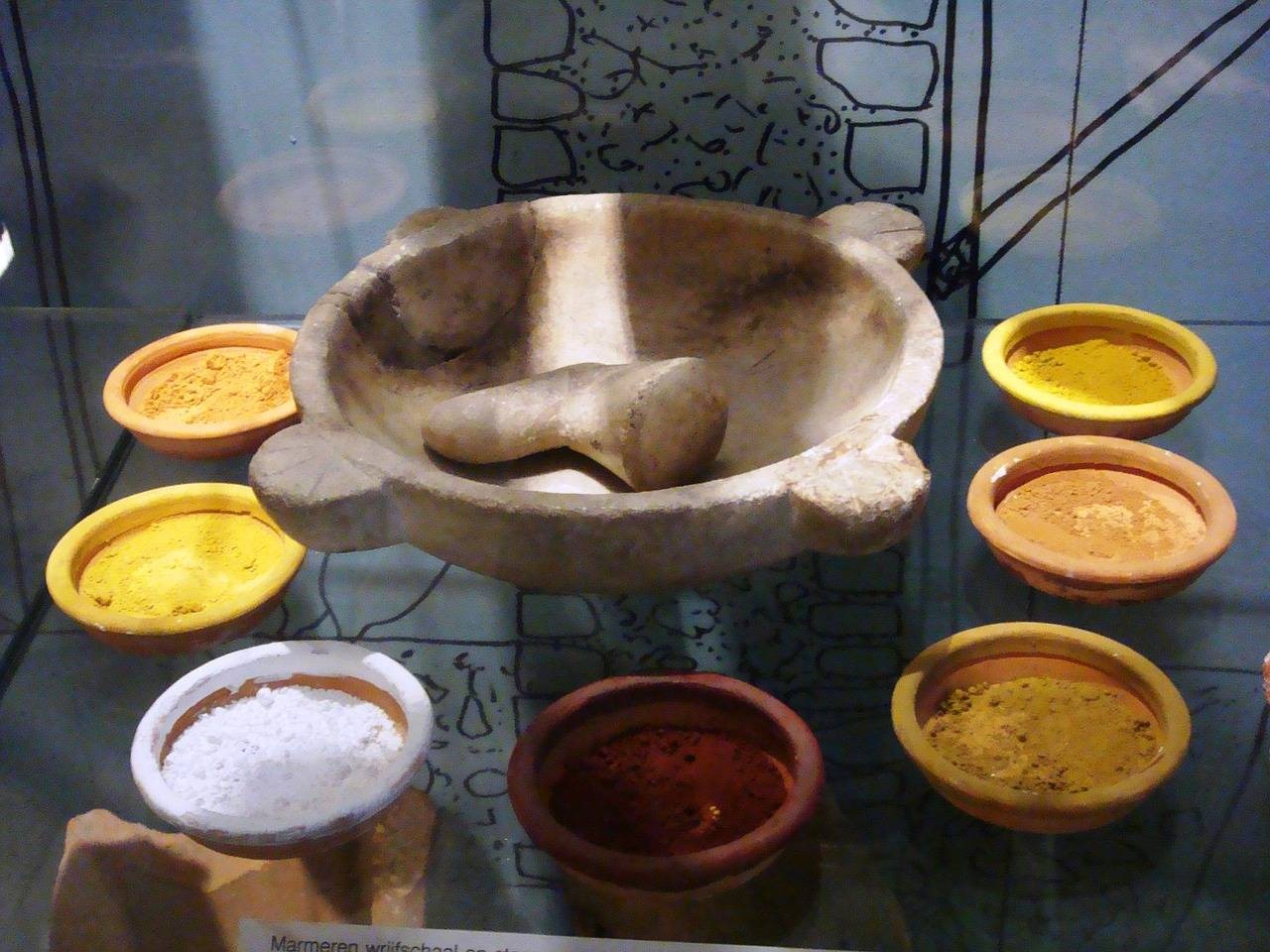 Ancient iconography tells the stories of the Christian gospels with metaphorical imagery and wonder. Figures from the Bible are often represented as animals in ways that seem mystical to the modern observer but which would’ve been understood by those familiar with the allegories of the time.

These colors weave throughout the images in elaborate flourishes that wind through illustrations like a meandering road, carrying the observer through the inner life of the artwork and the artist. Birds perch upon letters. Sea life swims in the margins, and angels guard a majestic Virgin and Child. 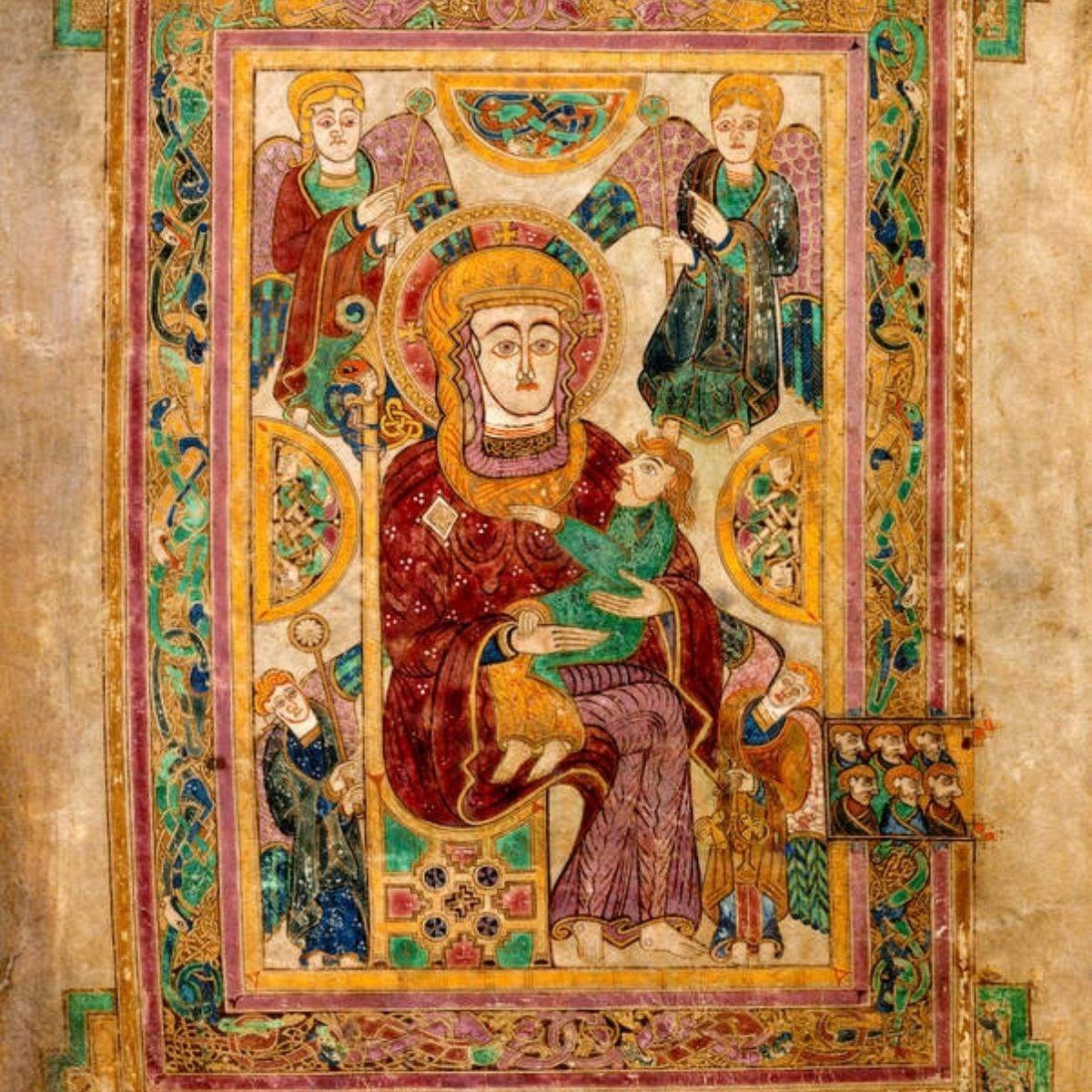 The book stands as a testament to the artists’ creativity and devotion to their faith. Every page, no matter its content, is treated like a miniature masterpiece.

Each page is an act of devotion as well as a remarkable chronicle of a long-ago time of beauty and danger. It is a tale of contrast. Of pristine nature but harsh conditions. Of people of faith and peace but also violent conquest. Of the resilience of art against the ravages of time.

All this has inspired the fragrance of our new Book of Kells Candle Bundle and creation of our Book of Kells Limited Edition Collection.

As you light this portal in a jar, the flickering flame will cast the shadows of stone arches upon your walls, and the soft shuffle of monks’ feet upon timeworn floors mingles with the distant chant of prayers.

A sea wind batters the walls bearing with it the aromas of the desk in front of you, where damp ink slowly dries upon a leather-bound tome, its pages alight under the golden flame of a dripping candle.

A quill scratches upon the surface, loud in the meditative quiet, as you watch the ink glide across the page, creating a world of color, imagination, and wonder. 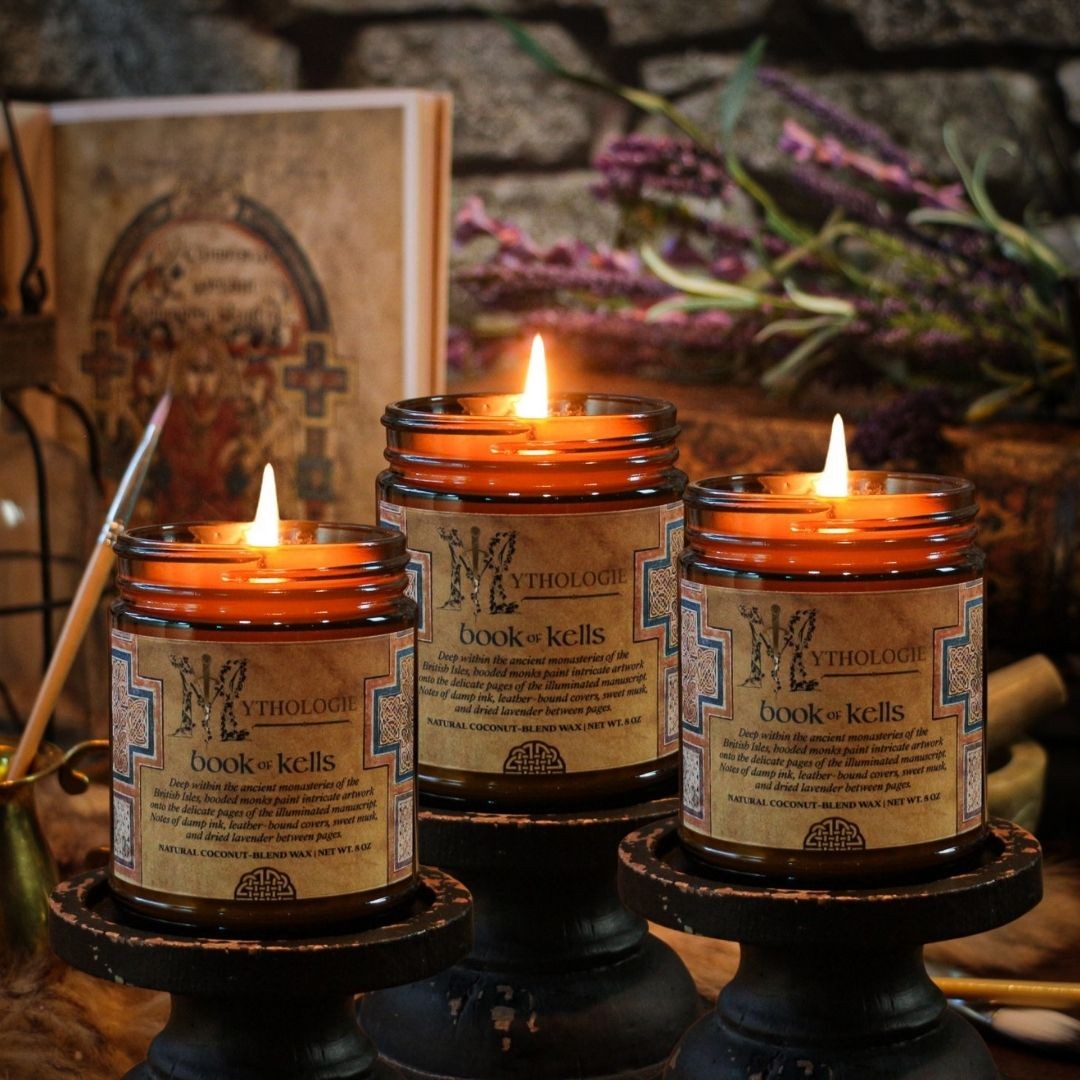 Bundle up with this fan favorite Mythologie Candle! Transport yourself to the misty shores of ancient Ireland, surround yourself with the stone walls of ancient abbeys, chanting monks, and the history of ages.

Mood: Deep within the ancient monasteries of the Scottish Isles, hooded monks paint intricate artwork onto the delicate pages of the illuminated manuscript.

Bundle up with this fan favorite Mythologie Candle! Transport yourself to the misty shores of ancient Ireland, surround yourself with the stone walls of ancient abbeys, chanting monks, and the history of ages.

Mood: Deep within the ancient monasteries of the Scottish Isles, hooded monks paint intricate artwork onto the delicate pages of the illuminated manuscript.